Looking for a Sound Artist?

With this being the first post of my first blog, I suppose I should start at the beginning and ease you in by telling you about what I do as a Sound Artist.

WHAT I MAKE ▾

▴ This is a little animation of me created by Katharine Agg of Gradino. I’ve accompanied the cartoon with a soundscape of original foley, field recordings, sound effects & music all composed and performed by me.

“What even is Foley?!”, I hear you cry. Foley is the performance and production of custom-made sound effects recorded in synchrony with visuals. Using a variety of physical props, an artist could be creating anything from squeaky door hinges and sword shwings to swishing clothing, dog paws and horse hooves.

▴ For the animation above I recorded:

Some typical examples of sound effects are:

▴ The sound effects recorded for the animation above are a series of computer keyboard scrolls recorded to underscore the text fade in.

When I’m brave enough to leave the studio, you may spot me battling the elements to record sounds. 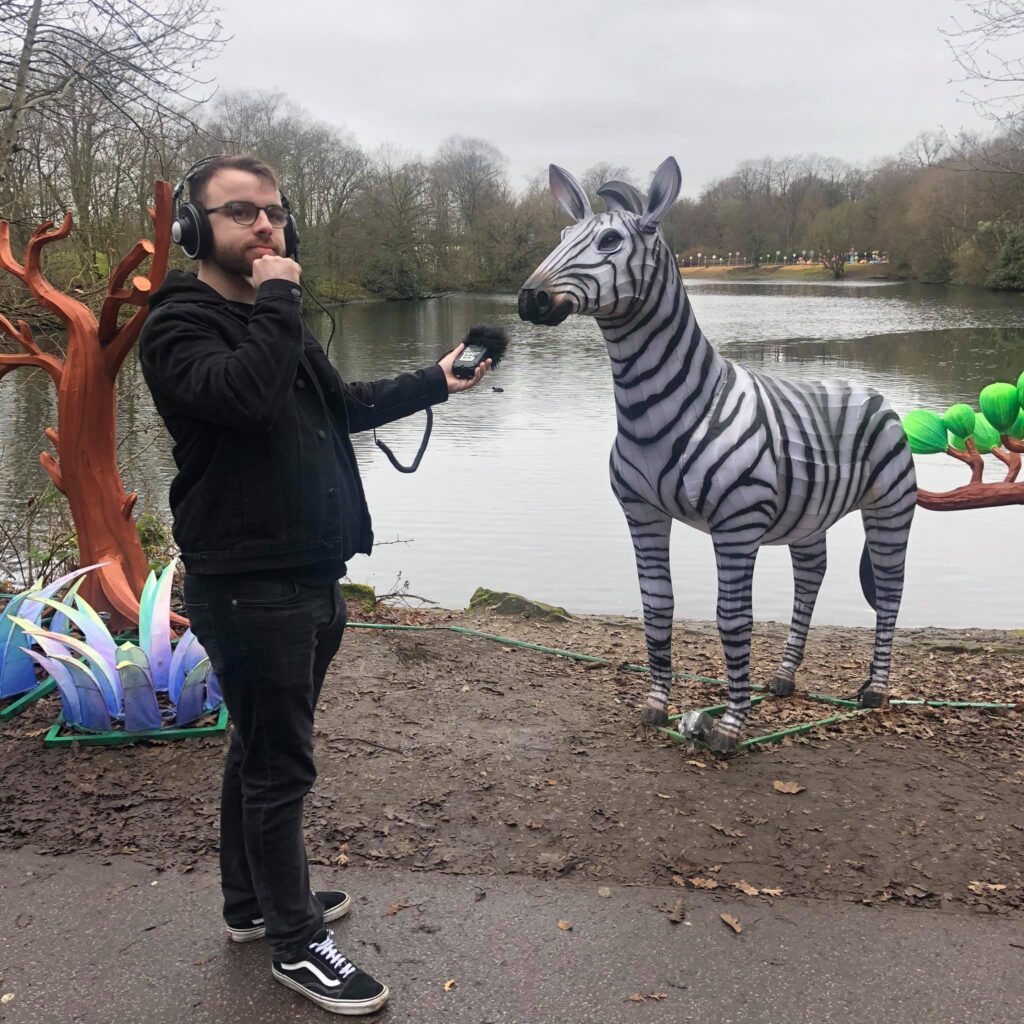 A Sound Artist out in the field.

While you can occasionally find me in the middle of a field trying to capture the perfect take of a lamb chewing grass. The term Field Recording isn’t used exclusively for sounds recorded in fields. The term can just be used to describe sound recordings recorded outside of a studio.

Recently, I’ve had the opportunity to work with Freshrb on number of projects, recordings ambiences and dialogue for their Silent Elephant Project Short Films and Workshops.

▴ For the animation above, I recorded several ambiences from my local canal and parks. I then layered the recordings together to create one unique ambient bed that sits underneath the foley and sound effects.

Before I fell feet first into the world of foley and sound effect recording, I was a musician. Principally a percussionist, I studied a BA (Hons) in Music Production at the University of Central Lancashire (UCLan). While studying at University, I developed skills and techniques in music composition, music production, sound design and video production. And in my third year, (with a lot of help from my dad) I even built my own tuned lithophones using slate.

▴ For the animation above, I composed a short piece of ambient music using a combination of electric guitars, bass guitar and una corda.

Thank you so much for taking the time to read my first blog. If you would like to reach out, you can find me on Instagram, email me at danny@dbjones.co.uk or via the contact form. I look forward to sharing more blogs with you soon.