MAKING THE WORLD A NOISIER PLACE, ONE SOUND AT A TIME 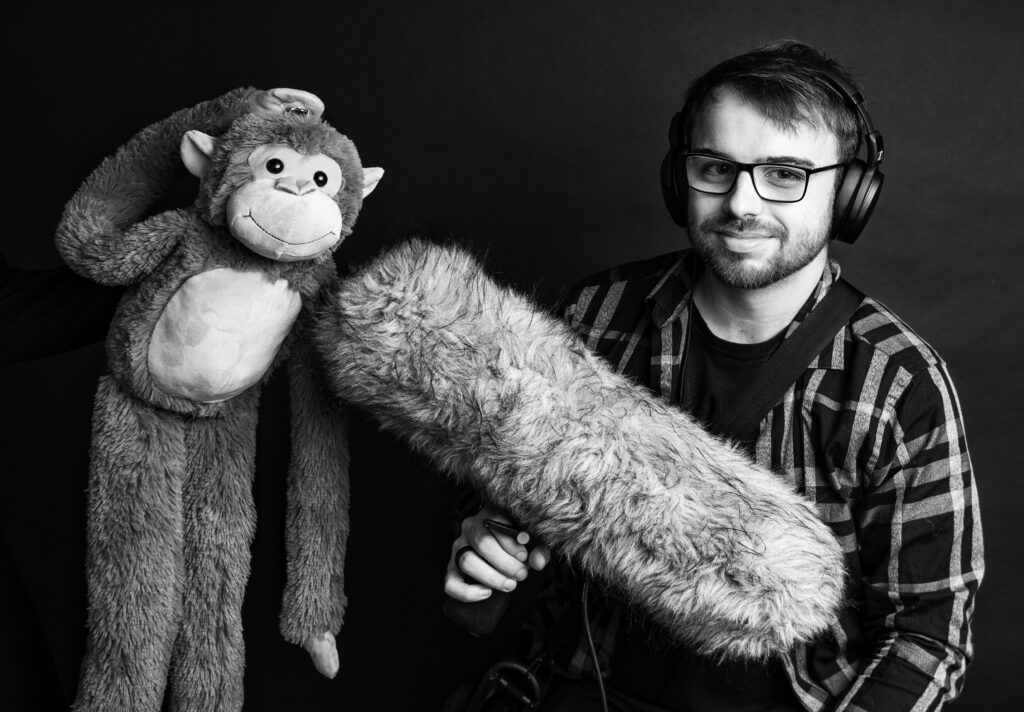 Hello. I’m Danny, and I’m a Foley Artist. Based in Manchester, I use an ever-growing collection of props to build bespoke soundscapes in sync to picture. I quite literally fell feet first into this mystical craft, and I haven’t been able to look back since.

Originally I trained as a musician, composing, performing, and producing music primarily as a percussionist, but with a passion for creating ambient guitar loops and generative soundscapes. I stumbled across the world of foley while studying Music Production at the University Of Central Lancashire. I immediately fell in love with the craft. It has since become a genuine passion for me to hone and develop my skills as an artist and editor. As I embark on this journey, I hope to grow as a Foley Artist and as a Post-Production Sound Engineer, expanding my Dialogue Editing, Sound Effects Editing, Sound Design, and Mixing capabilities.

Since March 2022, I’ve been a member of 344 Audio‘s sound team, working as a Foley Artist and Editor on the companies Film Projects and Sound Effects Libraries.

I’ve been lucky enough to be a regular Location Sound Recordist with Eastern Blok.

And I’m also a frequent collaborator with Freshrb, in particular on their Silent Elephant Projects. Producing sounds for Short Films and Documentaries that raise awareness for marginalized health conditions. In 2019, I officially joined the team as an Audio Production Consultant. I oversee a project’s soundscape throughout each stage of its production. In my role, I’m responsible for capturing location sound and field recordings alongside a plethora of audio post services.

Four facts about me:

I’m always looking to collaborate and meet new people. If you would like to work together, please email me at danny@dbjones.co.uk or via the contact form.

Check out my blog

Very professional and very adept as a sound recordist, foley artist and designer. It was a pleasure to work with Danny and will definitely work with him again. Oladamola Babalola (Mr. Babz). CEO, Social Entrepreneur and Film Director at Freshrb C.I.C.

Daniel is an extremely efficient when it comes to anything audio based. While I worked with Daniel, he displayed skills such as audio editing, foley and sound design. All of his work is to a high standard and is always produced on time. Lucy Butler. Lead Creative at Monkey Ears Media.

I have worked with Danny on a few projects now and he has always delivered. He has a great ear and sense of performance and timing in his foley work. Looking forward to more working on more projects in future! Brian Lane. Sound Editor/Designer & Composer at Dissolve Audio.

Danny absolutely nailed the sound recording and sound design of the short film that we worked on together. I would easily work with him again on another film. Dave Perkins. Senior Designer at Hullo Creative